Buying digital signage should be easy, but it’s not. That’s kind of why we exist, if I’m honest. We make it easier for you because we understand your apprehension. You’re over here trying to choose a simple screen and you’re confronted with all these LED-based buzzwords and it just gets more and more confusing, until you find yourself ugly crying on the floor, tangled up in HDMI cables  and wishing the digital signage fairy would just buzz along and make the decision for you.

Well, today’s your lucky day. The digital signage fairy is here to buzz her way through buzzwords and marketing jargon and give you some real talk about what kind of digital displays would be best for your business; LED, OLED or QLED.

These are kind of what we’d call the ‘standard screen’ at this point. They’ve been around for quite a while now. An LED screen is basically two parts squished together, a LCD panel and a LED backlight. We’re already loading up on initialisms, I’m afraid, but that LCD (liquid crystal display) creates images with red green or blue pixels with the help of electricity. LCDs are pretty dim on their own, so they need a back light. These LED backlights have become more sophisticated over the years, so now they make the screen brighter or darker in different parts to improve picture contrast and quality, but they’ll never achieve perfect contrast as LED light will bleed through to the image even when the pixels are black. These screens are still a good, affordable option for most people, though.

LG and Sony in particular are now turning to OLED technology for their high end screens. Though the name is similar this isn’t just an LED that’s been hanging out with free range chickens avoiding all pesticides. The technology is actually quite different. There’s no LCD panel requiring a backlight, instead there’s organic matter generating colour and light with electricity. This gives OLED screens the best possible contrast and the deepest, pure blacks of any screen. As there’s no back light, the pixels can just turn themselves off when they need to be deep black and no light will be emitted. None. There’ll be total darkness in that little pixel, with no light bleed. No matter how bright the rest of the screen is, the blacks are always pure black.

The colours and the picture quality are absolutely gorgeous, the only downsides are the brightness and the cost. OLED screens aren’t bright enough to stand out in brightly lit areas (like windows) but we’re hoping this will change in the next few years. OLED is also very expensive to manufacture, so only the higher end screens use the technology.

QLED is the name of Samsung’s high end screen technology. Fundamentally these displays are very similar to LED screens, with an LED backlight and an LCD panel, but they use quantum dots for vibrant, jaw dropping colour. Quantum dots are tiny, little nanoparticles that can emit light at different frequencies, giving more precise colour and a bigger, colour gamut than traditional LED screens.

As it’s using an LED backlight the contrast is still an issue. The blacks are better than regular LED screens, but they aren’t the pure, deep blacks of OLED. QLED is available in much higher nit than OLED, though, so they’re good for high brightness situations. QLED is quite new onto the market and we don’t know much about pricing, but as they’re so much cheaper to produce than OLED we’re hopeful they’ll be able to confidently beat OLED displays in this regard too.

There’s an argument that these screens are simply high end LED screens and we haven’t reached ‘proper’ QLED yet. True quantum dot technology should be able to supply their own light, which would then solve the issue of LED lighting bleeding through deep black colours. This is something to watch, to see if Samsung is able to bring this version of QLED out in the next few years.

Still feeling a little confused about which technology is best for you? Try our simple flow chart: 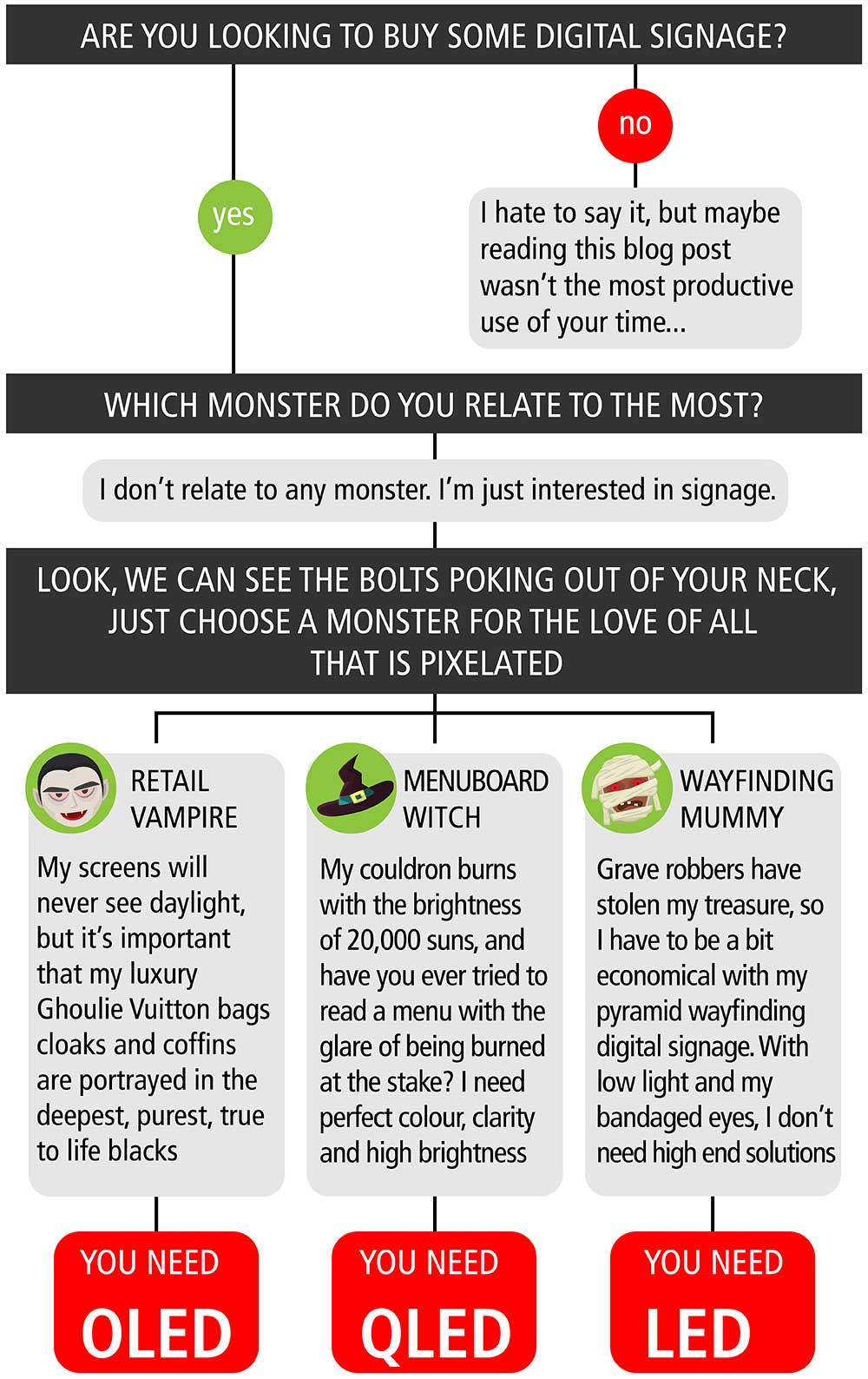